You may have heard of the “DARK act”, this is a labeling law that takes away a states right to require that GMO ingredients be identified on a label.

The Senate already passed this bill [S. 764 – also known as the DARK act]
and soon it will be voted on in the HOUSE. Rumors had it they were voting today and it is on the schedule, but we were not able to find any details of a vote.

Protestors throw money onto the Senate floor to make a point
https://www.youtube.com/watch?v=ItZp-Dbkyqk

This DARK act essentially makes reading the label to see if there are GMO ingredients difficult. Instead of English it would be in a code. So you’re going to have to walk around the grocery store trying to get an internet connection so you can read the darn code and see if GMOs are present in the product.

This is not the first time Monsanto and friends have tried to stop GMOs from being clearly identified on food labels. This is an on-going struggle to simply know what is in our food.

CONTACT YOUR REPRESENTATIVES! What Vermont has started needs to be built on, not overrun.

States rights must be maintained if we are ever going to see our way through this mess.

More information to fit the pieces together:
Name of Bill: The Roberts-Stabenow bill (S. 764)

Bill TEXT: As usual the GMO aspects of this bill are hidden within a bill not named anything like what it is for — S.764 – A bill to reauthorize and amend the National Sea Grant College Program Act, and for other purposes
https://www.congress.gov/bill/114th-congress/senate-bill/764
*Its all very confusing when you look at the bill text, cause there are so many different things that are totally not related but part of this bill. But, if you look here
you’ll see there [As amended by the Senate on July 7, 2016, the bill is the legislative vehicle for a measure concerning bioengineered food disclosure.]

Petition to Pres. Obama to veto The DARK ACT
https://petitions.whitehouse.gov/petition/veto-dark-act-s764

Saturday, May 21, is global March Against Monsanto Day.

Saturday is also a great opportunity to let the world know that we, the people, will hold Monsanto accountable for its crimes against humanity and nature, at the October 15-16 International Monsanto Tribunal.

Please join a march near you, or organize a march in your community. Use this year’s march to let your community know about the upcoming International Monsanto Tribunal, and that we will need everyone’s help to organize even bigger rallies against Monsanto on October 16, World Food Day, the day the tribunal wraps up its formal testimony.

Find a march near you.

Download a media advisory template that you can personalize and send to your local newspapers to let them know about your upcoming march.

Monsanto’s profits are down. And for the first time in 20 years, the number of acres planted in GMO crops has decreased.

The European Commission is under increasing pressure to reject Monsanto’s request to renew its license Roundup/glyphosate, and in the U.S., more than half a million people have petitioned the EPA to do the same.

This year, the grassroots food movement has blocked efforts by Monsanto and the Grocery Manufacturers Association to pass a federal law preempting Vermont’s mandatory GMO labeling law. The law will take effect July 1, unless a last-ditch effort by Monsanto and Big Food stops it.

Many food companies are already labeling, or have announced plans to label their GMO ingredients. Some of those companies say they now support mandatory labeling.

It has taken nearly 20 years, but we—and that means you—have come a long way in our efforts to bring down one of the largest, most destructive, multinational corporations in the world.

Remember the Monsanto-backed bill to squash GMO labeling? Well, it’s on the move again — and it’s worse than ever.
OPPOSE HR 1599  !!

Dubbed the “Deny Americans the Right to Know” or DARK Act by its critics, this bill would block GE food labeling laws across the country. This latest version would also prohibit local governments from restricting genetically engineered (GE) crops in any way — even when those laws are already on the books.
U.S. House likely to vote on Thursday.

STARBUCKS IN ALLIANCE WITH MONSANTO SUES STATE OF VERMONT
Contrary to the misleading information coming from Starbucks, the coffee company is in alliance with other Food Giants, including Monsanto, in suing the state of Vermont to overturn the GMO labeling laws voted for by the people.  An alliance is a pact, coalition or friendship between two or more parties, made in order to advance common goals and to secure common interests. Starbucks and Monsanto are members of the Grocery Manufacturers Alliance. The Grocery Manufacturers Alliance sued the state of Vermont to overturn the people’s will to mandate GMO labeling in Vermont.  In communications with Starbucks the company was unresponsive to the direct question on whether Starbuck’s coffee product contained GMOs. —Neil Young,California http://neilyoung.com/index.html
PETITION http://action.sumofus.org/a/starbucks-gmo-gma/

Here’s a few video reports … Thousands of people marched all over the world! 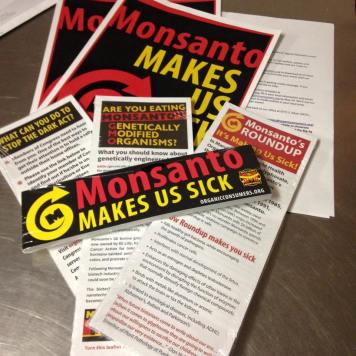 TIME TO  MARCH AGAINST MONSANTO! SATURDAY MAY 23

There are currently over 300 marches scheduled to take place around the world. People from all walks of life will be joining together to take a stand against Monsanto’s evil ways.