This is our last chance to keep Congress from stripping away crucial online privacy protections. Call your representatives now and tell them to protect federal privacy rules.

Your Internet service provider knows a lot about you: the webpages you visit, the things you purchase, the people you talk to, and more. Last year, the federal government updated rules to ensure that the companies that act as gatekeepers to the Internet can’t compromise your privacy to make a profit. Those rules were a huge win for consumers and are set to go into effect this year.

But Congress—along with the ISPs looking to make more money off of their customers—is trying to change that. The Senate voted 50-48 to pass a measure last week that would repeal those rules, and the House is scheduled to vote tomorrow.

Because Congress is using a little-known tool called a Congressional Review Act (CRA) resolution, it would also effectively prohibit the FCC from creating similar privacy rules in the future. That could leave consumers without a federal agency to protect them against privacy invasions by their ISPs.  READ MORE

And it’s not just following you around the Internet to sell your browsing records to advertisers that we’re worried about. If Congress repeals these rules, ISPs will be able to do things like hijack your Internet searches to redirect you to advertisers’ pages, show you additional ads, and use supercookies to track you even when you’re using pro-privacy settings like Incognito mode.

Let our representatives in Congress know that they can’t put ISPs’ profits ahead of their constituents’ privacy. Call your lawmakers today and tell them to oppose S.J. Res 34, the CRA resolution to repeal the FCC’s privacy rules. 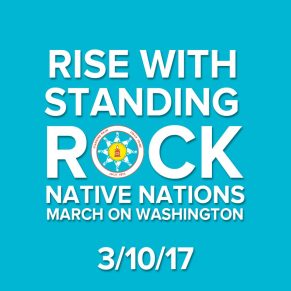 The Standing Rock Sioux Tribe and Indigenous grassroots leaders call on our allies across the United States and around the world to peacefully March on Washington DC. We ask that you rise in solidarity with the Indigenous peoples of the world whose rights protect Unci Maka (Grandmother Earth) for the future generations of all.

Standing Rock and Native Nations will lead a march in prayer and action in Washington D.C. on March 10th 2017.

For those who cannot march please take peaceful action at home in your tribal nations, states, cities, towns, villages and provinces.

Ventura — ?  Let us know if anyone has heard of a March. Thx!

Santa Barbara
Friday Eve March 10th, at Unity of SB! ( (Exact time TBA soon).
We’ll be co hosting a Prayer Vigil in solidarity with the Native Nations RIse March in D.C. standing against DAPl and KXL, and calling on the federal admin to meet with tribal leaders & show respect for Indigenous Nations and their right to protect their homelands, environment and future generations.We stand with them in their demand for tribal consent as well as consultation as a requirement for all decisions affecting tribal rights.
More specifics to come, but the evening will include prayer & music with indigenous elders & community members, and more.
We’ll be collecting donations to help pay the legal defense fees for the Water Protectors on the front lines, who have been arrested and cannot afford attorneys without our help.
We’ll also have the very special honor of welcoming a delegation of Diné (Navajo) Grandmothers traveling from Black Mesa / Big Mountain, Arizona.
Grandmothers will also be bringing their internationally-renowned, handwoven rugs, both a symbol of this resistance and an ancient artwork that has been passed down through countless generations.
Event invitation will be out soon. Please spread the word!

Notice of Intent To Prepare an Environmental Impact Statement in Connection With Dakota Access, LLC’s Request for an Easement To Cross Lake Oahe, North Dakota

IMPORTANT! SUBJECT LINE FOR EMAIL:
If emailing comments, use “NOI Comments, Dakota Access Pipeline Crossing” as the subject of your email.

To submit a formal comment regarding the notice of intent to prepare an environmental impact statement (EIS) in connection with Dakota Access, LLC’s request for an easement to cross Lake Oahe, North Dakota, please visit the Federal Register website. To ensure consideration during the development of an EIS, written comments on the scope of an EIS should be sent no later than February 20, 2017.

“Is there a clandestine force working behind the scenes in the United States, censoring truth about the “5G” tech rollout? Watch this — then decide.”
— https://memoryholeblog.com/2016/09/03/5g-communications-and-surveillance-technology-rollout-video/

“President Obama, one day after the FCC voted to adopt new 5G wireless technology that is called unsafe by health advocates, committed $400 million to 5G “research.”

“The bill would criminalize publishing undercover video footage of ‘health care providers’ and subject third parties, including journalists, to penalties for reporting and distributing the illegally recorded footage.” —  Jon Rappoport

The film Vaxxed could be outlawed in California, if this bill passes
California bill AB 1671
https://leginfo.legislature.ca.gov/faces/billTextClient.xhtml?bill_id=201520160AB1671

“Let’s see, Mr. Reporter. You received an undercover recording of a medical researcher confessing his crimes. You posted the recording and wrote about it. You’re the one who is guilty of a crime. Next case!”

FROM — http://www.thelibertybeacon.com/film-vaxxed-outlawed-california-bill-passes/
“It appears criminal penalties could be applied to anyone who posts the videos and comments on them, online. Not just reporters. And surely, audio recordings, as well as videos, would be banned.”

SUMMARY:
Makes it a crime to intentionally disclose, distribute, or attempt to disclose or distribute, in any manner, and for any purpose, the contents of a confidential communication after illegally obtaining it.
FROM — http://www.leginfo.ca.gov/pub/15-16/bill/asm/ab_1651-1700/ab_1671_cfa_20160418_093244_asm_comm.html

SONG THAT SAYS IT
Wake Up SleepyHead | FREEDOM OF PRESS