“The bill would criminalize publishing undercover video footage of ‘health care providers’ and subject third parties, including journalists, to penalties for reporting and distributing the illegally recorded footage.” —  Jon Rappoport

The film Vaxxed could be outlawed in California, if this bill passes
California bill AB 1671
https://leginfo.legislature.ca.gov/faces/billTextClient.xhtml?bill_id=201520160AB1671

“Let’s see, Mr. Reporter. You received an undercover recording of a medical researcher confessing his crimes. You posted the recording and wrote about it. You’re the one who is guilty of a crime. Next case!”

FROM — http://www.thelibertybeacon.com/film-vaxxed-outlawed-california-bill-passes/
“It appears criminal penalties could be applied to anyone who posts the videos and comments on them, online. Not just reporters. And surely, audio recordings, as well as videos, would be banned.”

SUMMARY:
Makes it a crime to intentionally disclose, distribute, or attempt to disclose or distribute, in any manner, and for any purpose, the contents of a confidential communication after illegally obtaining it.
FROM — http://www.leginfo.ca.gov/pub/15-16/bill/asm/ab_1651-1700/ab_1671_cfa_20160418_093244_asm_comm.html

SONG THAT SAYS IT
Wake Up SleepyHead | FREEDOM OF PRESS

corporations are not people, documentary about getting money out of politics, film about big money in politics, LAEMMLE NORTH HOLLYWOOD THEATRE pay to play, Pay to play documentary los angeles september 2014

PAY 2 PLAY follows filmmaker John Ennis’ quest to find a way out from under the Pay 2 Play System, where Politicians reward their donors with even larger sums from the public treasury — through contracts, tax cuts, and deregulation. Along the way, he journeys through high drama on the Ohio campaign trail, uncovers the secret history of the game Monopoly, and explores the underworld of L.A. street art on a humorous odyssey that reveals how much of a difference one person can make. PAY 2 PLAY: Democracy’s High Stakes is the layman’s guidebook to taking back our democracy. 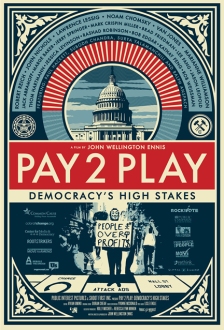 It is a very important time in the context of our movement earlier this week David Cobb, also of the Move to Amend National Leadership Team debated Jams Bopp who argued the Citizens United case before the Supreme Court, today the senate failed to pass SJR 19 and Move to Amend’s Pledge to Amend 2014 campaign is in full swing seeking to get elected officials on record as to whether they support the “We The People” amendment.  READ MORE

“The California State Senate passed a resolution calling upon Congress to amend the U.S. Constitution and eliminate the notion that corporate money equals First-Amendment-protected speech. The resolution, which explicitly calls upon Congress to convene a constitutional convention pursuant to Article V of the Constitution, makes California the second state, along with Vermont, to seek a legislative reversal of ‘corporate personhood’ enshrined in the Citizens United decision. ” — FROM DAILY KOS

California Proposition 49
http://ballotpedia.org/California_Proposition_49,_Amendment_to_Overturn_Citizens_United_Ruling_Question_(2014)
The California Proposition 49, the Amendment to Overturn Citizens United Ruling Question, is on the November 4, 2014 ballot in California as an advisory question. The measure asks voters whether the United States Congress shall propose, and theCalifornia Legislature ratify, an amendment or amendments to theUnited States Constitution to overturn Citizens United v. Federal Election Commission and other related judicial rulings.[1]

RUN-DOWN
What is Citizens United? http://en.wikipedia.org/wiki/Citizens_United_v._Federal_Election_Commission

Contact Your Senators
*Type in your zip code on this page to find out where your Senator stands on Overturning Citizens United and McCutcheon rulings. You can also send them a message from here:
http://action.citizen.org/p/dia/action3/common/public/?action_KEY=12488

http://movetoamend.nationbuilder.com/petition
We, the People of the United States of America, reject the U.S. Supreme Court’s Citizens United ruling and other related cases, and move to amend our Constitution to firmly establish that money is not speech, and that human beings, not corporations, are persons entitled to constitutional rights.

http://petitions.moveon.org/sign/signature-needed-senate
We urge you to support Sen. Tom Udall’s constitutional amendment. Money is not speech, and the Supreme Court’s decisions have perverted our democracy.  As Sen. Udall said: “elections have become more about the quantity of cash and less about the quality of ideas.” It is time to bring some balance.

Are Your Senators On Board?
https://action.citizen.org/p/dia/action3/common/public/?action_KEY=12488

Appearing by telepresence robot, Edward Snowden speaks at TED2014 about surveillance and Internet freedom. The right to data privacy, he suggests, is not a partisan issue, but requires a fundamental rethink of the role of the internet in our lives — and the laws that protect it. “Your rights matter,” he says, “because you never know when you’re going to need them.” Chris Anderson interviews, with special guest Tim Berners-Lee.

THE PRISM PROGRAM
A program about content. It could deputized corporate america to do the work of the NSA. Each company handles it in a different way, some are more responsible than others.
*Note: The secret FISA courts have reviewed over 33,000 warrant requests and only 11 have been rejected.

Boundless Informant is a program hidden from Congress
More communications are being collected on Americans than anywhere else.
The NSA has violated its own rules 1,000s of times a year.