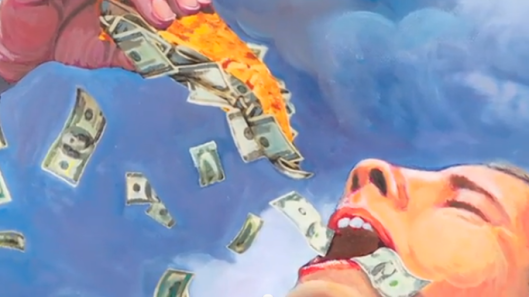 There is no doubt that Art and Music can create waves and facilitate awakening. Michael D’Antuono’s Art is not made to decorate rooms. It is an offensive weapon meant to jar the viewer into thinking and action.
http://artandresponse.com/

Class warfare is being waged by the corporate elite and Wall Street fat cats on the middle class. Artist Michael D’Antuono fights back with provocative art that illuminates the corruption of government and the increased disparity in wealth and opportunity it creates.

Picasso once said, “Painting is not done to decorate apartments. It is an offensive weapon in the defense against the enemy”. For most of us these days, the enemy is the rich and powerful, who feed their insatiable greed by mercilessly rigging the system against the common man. Artist, Michael D’Antuono fights back, by creating art that exposes their domination on government and it’s negative impact on our rest of us.